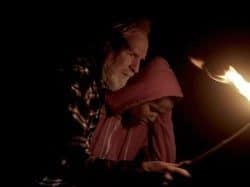 An apocalyptic event known as The Crisis has devastated David’s world leaving him dependent on survival tactics learned since childhood. Isolated and alone, David has taken refuge in a tent on the edge of the desert. Soon enough, another survivor emerges, Mary, who immediately begins to question David’s tactics and ultimately puts them in the crosshairs of “Those who walk in the dark,” invisible creatures who may or may not be responsible for The Crisis.