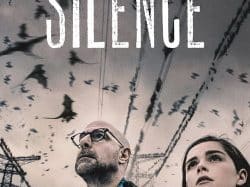 While it’s not fair to compare a movie to another, the parallels between “Silence” and “A Quiet Place” are too prominent to be ignored. Not only does this adaptation of John Lebbons’ novel of 2015 also about deadly creatures with a better hearing, but presents a deaf girl and her father tries to survive. Unlike “A Quiet Place,” in which hearing loss played a significant role not only in the narrative, deafness is barely explored and no significant part of the story.
The “Silence” creatures are the underground type, released from a cave where they grew up and planned world domination in the original scene. Named “vesps,” they seem the parents of a pterodactyl and Giger’s alien. It moves quickly when I hear a sound and it seems that the whole world will be destroyed by them in about a day or two.