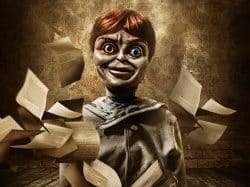 The Revenge of Robert the Doll

In Nazi Germany, a toy manufacturer takes possession of a mystical book that gives life to the inanimate. After evading the SS, who are under Hitler’s orders to retrieve the book, Toymaker board a train in an attempt to flee the country. Thinking that it is clean, the toy maker soon discovers that a group of high-ranking Nazi officers is also on board. Finally, their secret is revealed and the Nazis approach. But the toy maker has already used the magic tome to give life to a vintage doll named Robert, and Robert will stop at nothing to protect his master. Thus begins a blood-soaked battle aboard the train while Toymaker and the murderous doll face the Nazis. It is a fight to the death and only the winner will get off at the next stop.