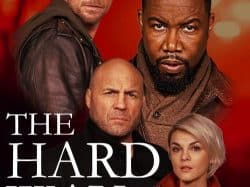 An ex-soldier learns that his brother died on a mission in Romania and makes allies to take revenge on a mysterious enemy.
HARD WAY with Michael Jai White is not a remake of the film The HARD WAY with Michael J. Fox. It’s a whole different story and he plays with Luke Goss and Randy Couture . The director and co-writer is Keoni Waxman, who has brought in more Seagal films than anyone else. He also made the film Stone Cold Steve Austin”HUNT to KILL.”