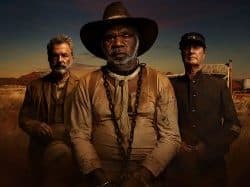 ‘Sweet Country’ is a film inspired by a true story that happened in the interior of Australia in 1929. When the aborigine Sam (Hamilton Morris) kills the white owner Harry March (Ewen Leslie) in self-defense, Sam and his wife Lizzie (Natassia Gorey-Furber) take flight. But the couple will be persecuted tirelessly by the authorities. An Australian western that sits on the Northern Frontier in 1920, where justice staggered when an aboriginal farmer shot at a white man in self-defense. They try to hunt him down, and the man will try to flee.