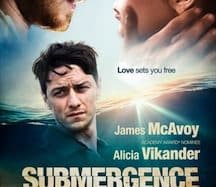 James More (James McAvoy) is a hydraulic engineer who has been taken hostage in Somalia by jihadist terrorists, who suspect he is a British spy. Danielle ‘Danny’ Flinders (Alicia Vikander) is a biomathematist working on a project of immersion in the deepest waters of the oceans to demonstrate her theory about the origin of life on the planet. A year before, James and Danny met in an isolated hotel on the French Atlantic coast, where both were preparing their dangerous missions, and there they found, in each other, the love of their lives. Now, separated, Danny starts his dangerous dive to the bottom of the ocean in Greenland without knowing if James is still alive.