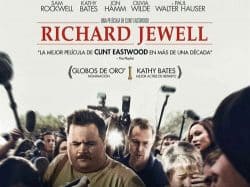 Excerpted from the headlines: at the Olympic Games held in the United States (Atlanta, Georgia, to be exact) in 1996, security guard Richard Jewell thinks fast, works fast and saves hundreds, perhaps thousands, of lives after a terrorist Domestic plants several pipe pumps. and they explode during a concert, only to be falsely suspicious of the crime for the careless work of the FBI and the sensational media coverage.