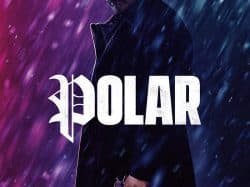 Duncan Vizla, the deadliest killer in the world, known as Black Kaiser (Mads Mikkelsen), is about to retire. But his old boss has put a price on his head. And, against his will, he has to stand up to a group of younger hitmen, quick and ruthless, ready to do anything to eliminate him. Adaptation of the graphic novel “Polar: Came From the Cold” by Victor Santos.