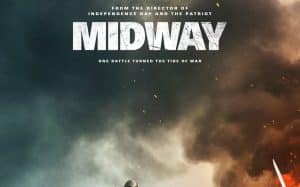 1942, World War II. After the devastating surprise attack that destroyed Pearl Harbor, the Imperial Japanese Navy is preparing for a new attack. But Admiral Nimitz (Woody Harrelson) and Dick Best (Ed Skrein), the best pilot in the US Navy, are preparing a counterattack to the imposing Japanese army. Dick will lead a massive attack that will make Japan realize his mistake. A decision that changed the course of history forever. While these two titanic enemies undertake a lethal battle to change the course of the war, all eyes turn to the remote island of Midway, where a series of shocking air and sea attacks will test the power and strength of both nations.