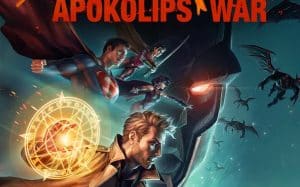 Culminating six years of an adventure that began with the release of Justice League: War in 2014, Justice League Dark: Apokolips War features a planet Earth utterly devastated by the intergalactic tyrant Darkseid in which superheroes have barely been able to cope with war. The last remaining warrior strongholds must regroup to create a strategy that allows them to confront Darkseid for the purpose of saving the planet and its few survivors. This is the war that will end all wars.