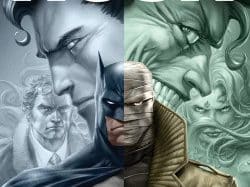 A new villain whose name is only known, “Hush,” employs all of Gotham’s enemies to destroy the life of both Batman, the hero, and Bruce Wayne, the businessman and playboy who now maintains an intimate relationship with Selina Kyle, also known as “Catwoman”. Adaptation of one of the great classics of the DC universe: “Batman: Hush” written by Jeph Loeb and drawn by Jim Lee.