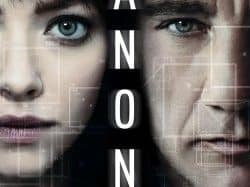 Anon takes us to a future not too distant in the Soviet style, where the government tries to fight crime by eliminating privacy, thus creating total vigilance and self-censorship. A police officer named Sal Frieland does his best to fight crime in his city. However, things take an unexpected turn when he comes across a hacker known as The Girl, which will lead him to question his own government.