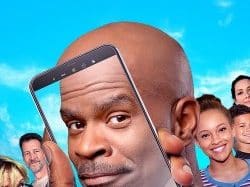 Entering a midlife crisis and feeling disconnected from his family, Ben Marcus, a reality TV editor, believes that he can only be happy if he fulfills his dream of becoming a professional comedian. Ben posts his standing routines on YouTube, and the videos drop. Later, his tweener son posts Ben miserably failing a home improvement project, and to his teenage daughter’s dismay, he goes viral, kicking off Ben’s social media career as Selfie Dad. Although he quickly becomes an award-winning phenomenon, no amount of success brings satisfaction to Ben. Through his friendship with a young coworker, Mickey, Ben finds the secret of a happy family. . . with his Bible in one hand and his phone in the other.