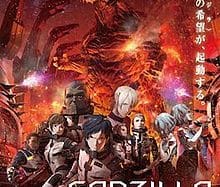 Godzilla- City on the Edge of Battle

In the last summer of the twentieth century, human beings discovered that they are not the only ones that rule the planet Earth, because they appear huge creatures known as “kaiju” and the final being that destroys them all: Godzilla. Due to the battle against monsters that lasted more than half a century, humans have experienced one defeat after another until, finally, they decide to escape from Earth. In the year 2048, only those selected by the IA that controls the central government were able to board the interstellar ship Aratrum to go to Tau Ceti e, a planet 11.9 light years from ours. However, the differences in environmental conditions are much worse than expected and the new world turns out to be an impossible one to inhabit.