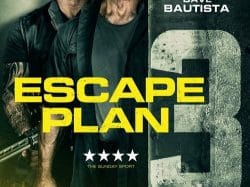 Security expert Ray Breslin (Stallone) is hired to rescue the daughter of a Hong Kong tech mogul who has been kidnapped and taken into custody in a Latvian prison. As if this were not enough, his girlfriend (Jamie King) is also captured. Now, he and his team (Dave Bautista & Curtis ’50 Cent ’Jackson) must carry out a rescue mission that will lead them to face their worst enemy as they try to safeguard the hostages.