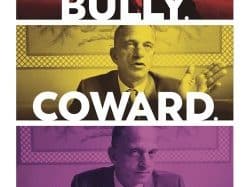 Bully. Coward. Victim. Roy Cohn’s story offers an unwavering look at the infamous lawyer who prosecuted Ivy Meeropol’s grandparents, Julius and Ethel Rosenberg, and then persuasively argued his execution in what became known as the “atomic spies” case. Directed by Ivy Meeropol, the film examines Cohn’s life as a senior adviser to Senator Joseph McCarthy in the late 1950s and then during the 1980s, when he became a lover of the Reagan White House, an anti-gay activist rabid and political mentor to Donald J. Trump before he died of AIDS in 1986. The film is based on extensive newly discovered footage, shot at the height of Cohn’s career as a power broker in the rough and fallen world of business and politics of New York City.