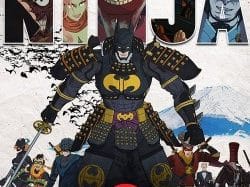 Batman, along with his allies and enemies, is transported from modern Gotham to feudal Japan. Animated film co-produced between Japan and the USA with a screenplay by Kazuki Nakashima (Kill La Kill) and character design by Takashi Okazaki (Afro Samurai).