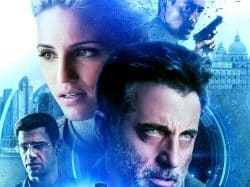 For his solo debut as a director-writer, Mark Polski made his own dirty version of a spy thriller. “Against the clock” shifts unpredictably between realities, telling a story that doesn’t make much sense.
The Polish man himself appears as CIA agent Kelley Chandler, who performs a continuing mission while in a coma on a hospital bed.